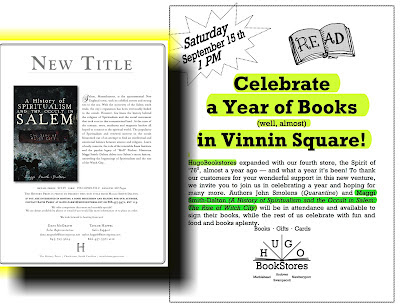 Please join us in Swampscott at the Spirt of '76 for the first booksigning of Maggi's new book!
http://hugobookstores.com/event/celebrate-year-books-vinnin-square-spirit2

In Salem, the Trolley Depot was the very first to order Maggi's new title...if you're in Salem stop by and say hi to these great folks (they have Maggi's first book there too!)
Posted by Maggi Smith-Dalton at 6:48 PM No comments:

The book is now released...after two years of saying "I'll do that atbf...(after the book is finished) I can try to catch up on the rest of my life! grin.

What's it about?
Spiritualism was an important element in 19th-century culture, in America and indeed worldwide. Salem provided fertile ground for the growth of this and other religions, yet, because of its link to witchcraft in the infamous trials of 1692--a serious and persistent black mark on the town's reputation-- struggled with anything which might give more fuel to the fire of being linked to occult practices.

My book examines this struggle and the elements that went into the gradual evolution of Salem towards what we would recognize as the Salem of today. And, in so doing, I tell a larger story about the way alternative religions such as Spiritualism grew in 19th century America, using Salem, a town that prided itself on its arts, culture, professional class, and love of science, as the connecting thread.

I'll be doing some readings, lectures, and booksignings in the Boston area starting in September 2012.

You can obtain the book https://historypress.net/search.php?s=Smith-Dalton&submit=Search

In Salem, the Trolley Depot ordered it right away; you can also get in on Amazon.com and BN.com of course, etc. 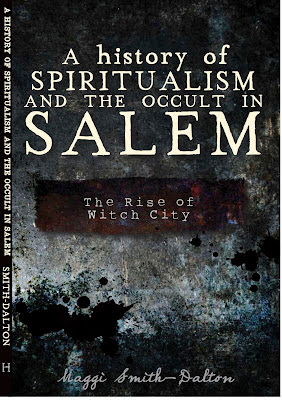 Posted by Maggi Smith-Dalton at 6:05 PM No comments: